Successful Launch into the Urban Communities

Successful Launch into the Urban Communities

January 27, 2015 marked the launch of the Urban Initiative for Biblical Entrepreneurship.  Bringing BE into the Urban Communities is not only part of the great commission but it is truly about breaking strongholds of the enemy and setting God’s people free so that they may worship Him.

15 Urban Leaders/Pastors/Bishops gathered for this incredible launch from New York, Maryland, Florida, Connecticut, Michigan and North Carolina.  These 15 influencers started the process and will be the “Change Agents” to break down strongholds in the Urban Community.

Bishop Allen Wiggins shared the old adage “when the tide rises all the ships in the harbor rise” was a complete lie in the Urban Community.  Because there have been levees and walls built to insulate the Urban Community from the outside influence.  This visual was a spiritual vision for me.  I am a white male who grew up in a privileged family in a small town.  During this discussion I saw for the first time that what Bishop Wiggins had shared was true.  The levees and walls built are spiritual walls of the enemy intended to keep God’s people captive.  “For we do not wrestle against flesh and blood, but against principalities, against powers, against the rulers of the darkness of this age, against spiritual hosts of wickedness in the heavenly places.”(Ephesian 6:12 NKJV)  I for the first time felt the pain of my brothers and recognized the hurt and struggle that I was unaware of because it was out of my sight.

The Urban Initiative is about building bridges.  Nehemiah was a builder.  His heart was broken when he became aware of the condition “So it was, when I heard these words, that I sat down and wept, and mourned for many days; I was fasting and praying before the God of heaven.” (Nehemiah 1:4 NKJV) Nehemiah first sought God, then he asked for the king’s favor and received all the resources necessary to complete the calling God had given him. “Furthermore I said to the king, “If it pleases the king, let letters be given to me for the governors of the region beyond the River, that they must permit me to pass through till I come to Judah, and a letter to Asaph the keeper of the king’s forest, that he must give me timber to make beams for the gates of the citadel which pertains to the temple, for the city wall, and for the house that I will occupy.” And the king granted them to me according to the good hand of my God upon me.” (Nehemiah 2:7-8 NKJV)

The battle to change what is happening in the Urban Communities will not be an easy one but; just as Nehemiah said, “So I answered them, and said to them, “The God of heaven Himself will prosper us; therefore we His servants will arise and build,”(Nehemiah 2:20a); as we team up and build together “The God of heaven will prosper us.”  As men and women of God, whether black, white, red, brown or yellow we are all children of the Most High God called to stand, serve and love one and other.  We are to bear each other’s’ burdens.  We are called to build bridges that will aid and empower others.

The Urban Initiative is truly a chance to build bridges of prosperity, healing and empowerment into the communities that are held under the greatest bondage.  These Urban Leaders are the 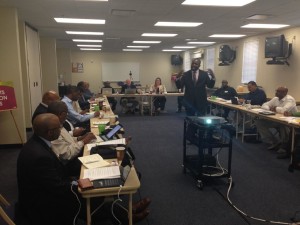 “Change Agents” returning to their lands with the favor of the King to bring about the change and restoration we all long for.  Biblical Entrepreneurship started in the Urban Communities in 1997 but as BE grew nationally and internationally the higher training fees and lack of intentionality made it more difficult to expand in the urban markets.  BE is returning to its roots with the launch of the Urban Initiative and with the help of these Urban Leaders and you we will be able to break down the levees that are holding the Urban communities captive.

Please join us in the Urban Initiative by donating to our Urban Scholarship Fund, introducing us to the leaders in other urban communities who are ready and have the influence to impact and “rise up and build” with us.  If your heart breaks for those in bondage, join us now.

To learn how you can connect and contribute to the Urban Initiative contact ty@nehemiahproject.org

Ty Dye, US Director of Training and Development